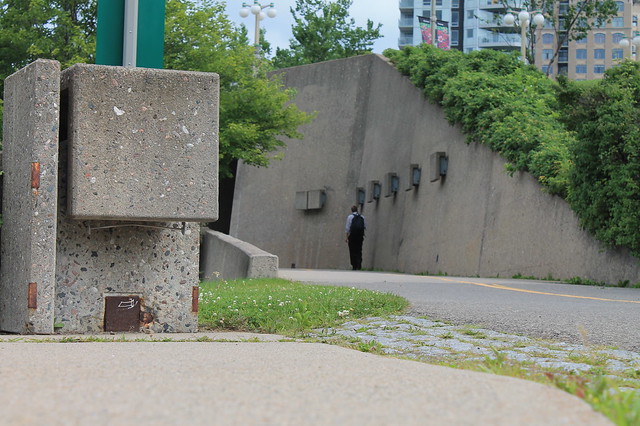 “Excuse me, miss. Can I take a picture with your camera? You can hold onto my skateboard to make sure I don’t run away with it.” Sounded like fair collateral and a fun exchange to me.

I’m not a skater. Not yet, anyways. I am becoming more and more motivated to learn. It is interesting and important to understand how different people see and use the city. When you watch skateboarding, and really pay attention, it is pretty remarkable how skaters relate to space.

They see things through a specific lens; through the movement and physics of a skateboard, creating and navigating obstacles, appropriating and sharing space. So when this random skater asked me to trust him with my camera, rather than worried he might run off with my camera, I was pretty excited for the opportunity to see the city even more directly through the eyes of a skater.

He asked me a few questions about how to use the camera. I assured him I could set it all to automatic. All he had to do was frame a shot and push the button. “Maybe I’ll just tell you what picture to take.” You can almost imagine he was giving me instructions on where to skate as much as how to compose the photo:

“Maybe if you get low down to the ground,” he started. “See that edge? Follow that line. Now wait a second and follow this guy as he’s walking away. . . and. . . go!” Not only was I seeing his city, I got to hear him describe the play by play of how he saw it and the moment he wanted to capture. We sat and chatted for a few minutes and then we both continued on our way.

I am maybe over-romanticizing and over-thinking this brief encounter. But there is a certain sensibility towards the city that is really captivating, here. There is a consciousness of the design of the space. The lines. The edges. The flow. But there is also a consciousness of the other people around and how they move through the space. Noting perhaps how most other people are using the space more or less as intended. Walk on the path. Sit on the bench.

Meanwhile, there are people who ask: What else could this space be? How else could I use it? What is its hidden potential? We all do to one degree or another at some point as we engage with the city. It seems pretty clear that this sensibility has had a positive impact for both the skateboard and overall Centretown community. 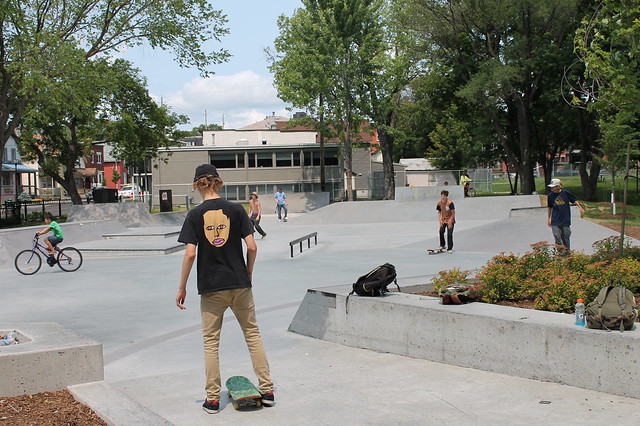 On Saturday July 4th, the Charlie Bowins Skatepark officially opened at McNabb Park. Both the inclusion of the skatepark as part of the revitalization of McNabb, and ensuring that it was fully and properly realized, are largely thanks to the grassroots initiative of the Ottawa Skateboard Community Association (OSCA) and the overwhelming community support they rallied together.

The first win for OSCA was when the plans for McNabb revitalization included a skatepark in the space opened up by the removal of the lawnbowling club. OSCA had been petitioning the city for skateboard facilities in the downtown core for some time already. But despite this step forward, the city’s initial budget for the construction was well below the standard $40/sq.ft. and OSCA had its next challenge.

In Fall 2013, they launched the 1squrefoot crowdfunding campaign to raise the remaining necessary funds. Though the campaign fell significantly short of its lofty $200,000 goal, it was hard for the city to ignore the overwhelming community support and enthusiasm the campaign generated. The outstanding funds were added to the city budget.

The skatepark is named in memory of Charlie Bowins, an active member of the local skate community. It is a fitting tribute to both Charlie and the community for their vision and dedication to realizing the project. The skatepark has cemented not only the physical space for skateboarding in Centretown, but also the much less tangible welcoming of the skateboard community as part of the mix that is Centretown.

The challenge is not over. It is curious that despite all the enthusiasm, we still see the pervasiveness of anti-skate design and anti-skate sentiment. Little metal clips fastened to ledges and steps and no-skateboarding signs are still commonplace. There are still misperceptions about skaters and skateboarding as antisocial despite the strong evidence of the active productive role they have taken in contributing to the neighbourhood.

But the bigger lesson perhaps is to consider all the other stereotyped communities and people in the city who see and use the city differently, who need their own space, and who need to feel welcomed as part of the mix.