Last summer, following the 40th anniversary of the Ottawa Public Library Main Branch on Metcalfe, the Main Library Facility Planning report was released including three recommendations; renewal, renovation, or redevelopment. Two years earlier, a Nanos Research survey reported that 83% of users of the main branch were satisfied with their user experience, the wide selection of resources, and central location. At that time, the OPL board supported modernization as its prefered option. This month, the OPL board will review yet another report, this time recommending the construction of a new central library. 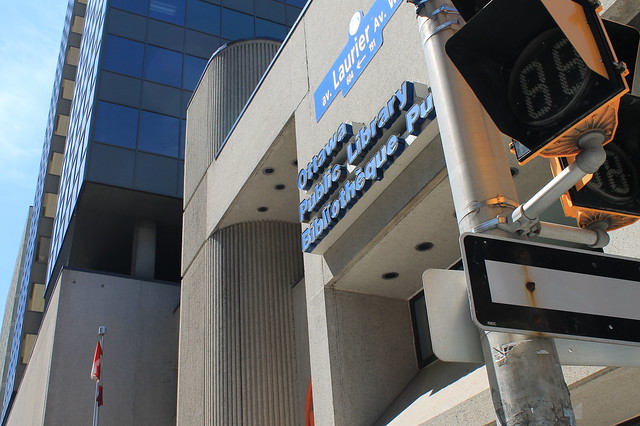 The report released at the end of May incorporates feedback from “a very comprehensive public engagement process” including the public meeting at city hall on March 31st. 150 people attended the meeting and another 435 tuned into the live online broadcast. A breakout session invited those with a seat at city hall to “dream big” with a “sky’s the limit” vision for a new central library. Due to technical difficulties with the online feedback system, the discussion for those following online was unproductively relegated to Facebook resulting in only a handful of comments.

So, in the words of one of three questions for public input: “How would a Central Library transform our lives and our city?”

The report is a glossy and enthusiastic call for a library that is modern, innovative, connected, landmark, plus a handful more buzzwords. Beyond the traditional library spaces, it should contain a café, restaurants, collaborative workshop spaces, a teen zone, discover spaces, meeting rooms, outdoor and indoor gardens, and all wrapped in a bold—preferably glass—architectural statement that proudly shouts out: THIS IS OTTAWA’S LIBRARY!

It reads as a loud and extroverted vision for a library. Is that not a bit strange for a library? Are not libraries quiet and contemplative places? Yes, yes. I know. Libraries are changing. Digital technology. Virtual space. But are libraries really changing as a response to technology? Reviewing the wishlist from the report makes me wonder if people were describing a library, a community centre, or maybe even an image of their ideal neighbourhood. It is not that surprising. Libraries are one of the few remaining free public civic buildings. In an increasingly privatized and commercialized city, libraries and parks are two of the few public building projects we can target for our wishlist for shared community space. Certainly there is room for overlap between different community spaces but there are also ways in which the different programs conflict.

We should be careful not to lose the library amidst the noise of a “dream big” wishlist for public space. By the same token, we should not ignore the clear thirst for more public space by hoping to cram it all into a single building project.

I take issue with several of the recommendations and conclusions in the latest report. First, the jump from the renew, renovate, redevelop options to abandoning the existing library and building new. The report recommends a central library of 132,000 sq.ft. to accommodate the functional programming that emerged from combining best practices, the Ottawa context and existing OPL branch network, and the public wishlist. The existing building only offers a total of 109,000 sq.ft. leading the writers of the report to conclude that the only solution is a new building.

If I were to add up all the functional programming for my “dream big” home, it would not fit into a 600 square foot apartment. But there are two important factors as to why my 600 sq.ft. apartment is able to fulfill my housing needs and then some. First, a lot of the spaces in my apartment serve different functions at different times. Second, I live downtown and have easy access to places that fulfill my needs without having to have them contained within my private residence. Who needs a guest room and formal dining room when there is a hotel and huge selection of restaurants down the street?

Both factors are based on my willingness to make certain concessions and sacrifices because of the ever important consideration; location, location, location. Interestingly, several attendees reported that this major issue of pressing public concern was specifically left off the library roundtable. The “sky’s the limit” public consultation on the “central library” was limited to a wishlist definition of “library” but did not invite any discussion of “central”. Not only did this not provide participants an opportunity to identify the key considerations for defining a central location, it did not invite a discussion on how the location might impact the program.

If space is at a premium, could not some of the spaces serve multiple functions? And why exactly does a central library need a café, a staff exercise room, print facilities, meeting rooms, etc. when it is surrounded by coffee shops, gyms, printers, office space? If we want to discuss the option of public private partnerships, why not consider partnerships with a network of private enterprises scattered within easy walking distance that could provide different desired bonus but not entirely integral services? Let the library be the central program of the central library.

My second concern is with the architectural vision being promoted. Let me start by getting my personal taste out of the way and reiterate that I think Ottawa already has a landmark and architecturally significant Central Library. The existing library on Metcalfe is a stunning example of Canadian brutalism. I admit that concrete has gone out of fashion and glass is back in. But all the more reason to warn against so much focus on a flashy design that follows the current design trends.

Trends keep us from considering important design questions. Is a library a place to look out onto the city or a place to retreat from it? Do you want a bright open space to read your book or a cozy little nook? The history of library design continually shifts between these two somewhat contradictory ends of the spectrum, from extroverted to introverted.

Obviously I don’t mean to argue against my profession. I do mean to point out that architecture is more than the creation of an eye-catching, postcard (or selfie) ready, billboard for a city. A skillful and thoughtful architect is just as capable of designing an elegant and understated building that functions well, connects with the individual user, and creates value and meaning for the community it serves. It is a disservice to both the library and architecture to put so much emphasis on the look of the building.