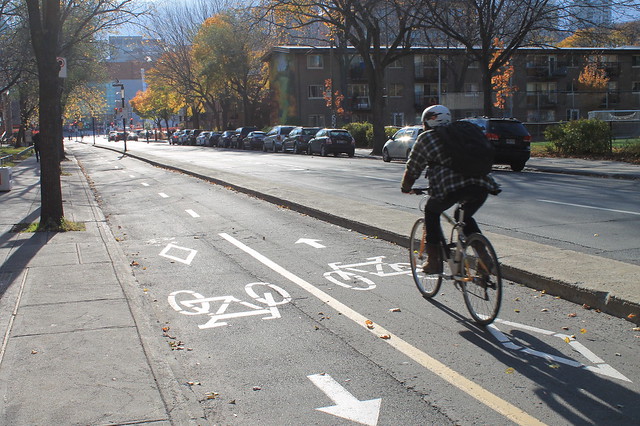 The stretch covered by the study runs from Wellington Street to Glebe Avenue—through the central business district, Centretown, and the Glebe. The 2013 Transportation Master Plan designates O’Connor as a cross-town bikeway and spine route.

This designation comes with requirements to provide a high level of comfort, safety, and convenience in a dedicated on-road cycling space. The goal is to dramatically increase the number of cycling trips and modal share. It will no doubt attract a large amount of commuters on bikes. It adds an important and conspicuously missing north-south connection to the cycling network.

The challenge, however, will be how to achieve the high—but encouraging and appropriate—goal of being “family friendly.” Transforming O’Connor Street from its current state, essentially an elongated Queensway on-ramp, into a comfortable and safe space for cycling for all ages is a very exciting prospect.

Given that I lived two blocks away on Elgin Street and that I am perhaps overly enthusiastic and passionate about my chosen primary mode of transportation, I was eager to participate in the consultation.

In June, I was trying to imagine what shape the O’Connor project might take and to provide constructive feedback. Now I ride my bike on a very similar street on a near-daily basis and have a few new observations and insights to share.

With my movers delayed, my beloved, trusted silver steed (aka my beautiful step-through bike) and I were separated for over a week. I have a lot of good things to say about BIXI, but it’s just not the same, and it’s a story for another day. Once reunited with my bike, the flat tire repaired, I set out to start exploring my new city and quickly realized the important role the Claire Morissette bikepath plays in how I navigate the city.

As I discovered with the Laurier bike lane and O-train bike path, cyclists are willing to redirect their travel routes, and sometimes even their destinations, if it means the difference between good cycling infrastructure or not. If I’m undecided between two restaurants for dinner or various businesses and shops, I tend towards the ones accessible by the bike path. Many local businesses in the past have resisted bike lanes, usually over concerns of reduced parking. But as bike mode share continues to grow, businesses located along bike lanes will see the positive impact.

My other bias towards using de Maisonneuve has to do with my hill aversion. The gradual westbound incline saves me from the exhausting hills included in my alternate commute routes. Even better is the perfect downhill glide home at the end of the day.

Avoiding uphill climbs is far less of a concern in Ottawa. But, remembering that a bike is not a car, and easing the additional burdens and discomforts that are part of a bike trip, is important in the design of an effective and pleasant bikeway.

One suggestion I put forward at the group meeting was for wind and shade studies. It has not yet been decided if the bi-directional lane(s) will be on the east or west side or split down O’Connor. Shade in the summer and protection from the wind in the winter could be important considerations in determining where to locate the lanes for optimal comfort.

One of the greatest challenges identified for the O’Connor Street Bikeway is the frequency of intersections.

Unlike O’Connor, de Maisonneuve runs along the long side of the city blocks, which means greater distances between intersections.

And intersections are problematic.

For those using the bikeway as a spine connection, the main concern will be timing the light sequence to minimize stop-and-go—annoying for everyone, but exhausting on a bike. Often lights are timed to car speeds, which can leave cyclists stuck with a red at every light. I’ve noticed this is especially true on de Maisonneuve in the counterflow direction. Not only do the lights prioritize car speeds, they prioritize westbound traffic.

For local bike traffic, the problem with intersections on a spine route is turning off the path, especially with a bi-directional path on a one-way street intersecting other one-way streets. This is the most unpleasant part of my commute: turning left across two lanes of car traffic, or pulling over to wait for the light in the other direction, either in the narrow median space separating the bike lane from car traffic, or cutting across the oncoming bike traffic and trying to turn around in front of the cars stopped at the light on the cross-street.

Bike boxes and priority lights for bikes are possible solutions, but likely impractical at every intersection, especially frequent intersections on O’Connor. Beyond the need for a particular solution to this problem, it points to a general issue with cycling infrastructure. It’s easy enough to designate a lane in a straight line. Integrating it and connecting it to the network is the hard but critical part.

The last issue I wish to bring up here is sharing the road. It’s been great cycling in a city with a higher bike mode share. There is safety in numbers, mostly because drivers anticipate your presence. But there is a down side.

I’ve noticed a bit of arrogance and aggressiveness among my fellow cyclists here which I expect comes from a reduced need to ride as defensively and alertly as one tends to in a city such as Ottawa.

Rather than expecting a respectful share of the road, a large number of cyclists here seem to claim a dominant ownership of the road. I don’t think this is the inevitable attitude. It may very well be a response to the number of frustrations that cyclists face when navigating space and regulations that still fundamentally prioritize cars. I do believe better design can lead to better attitudes.

The O’Connor Street Bikeway will be combined with the scheduled resurfacing of O’Connor which, on one hand, helps to ensure a timely implementation, but on the other, restricts design options to the existing curbs and sidewalks. So the degree of flexibility to incorporate public feedback may be limited.

As many members of the consultation group commented, these consultations and the people they include are highly encouraging signs. Cycling issues in the city have come a long way even in the last five years. Of course we’d prefer sooner rather than later but “when, not if it happens” is an important shift in the discussion about cycling in Ottawa.