Originally published on yowLAB
Republished in the Centretown Buzz
by Sarah Gelbard
February 15, 2013

Condo developments can have both positive and negative impacts on the local neighbourhood and the city as a whole.

Promoting projects that will have a net positive impact is part balancing private interest and public good, and part capitalizing on ways private interests can cooperatively reinforce and create opportunities for public good. As with any urban development, there is no magic formula or plan to guarantee a development will be entirely positive or neutral. However, the way the following five issues are approached by the developer, the City, and the community can promote socially responsible, responsive, and adaptive development. 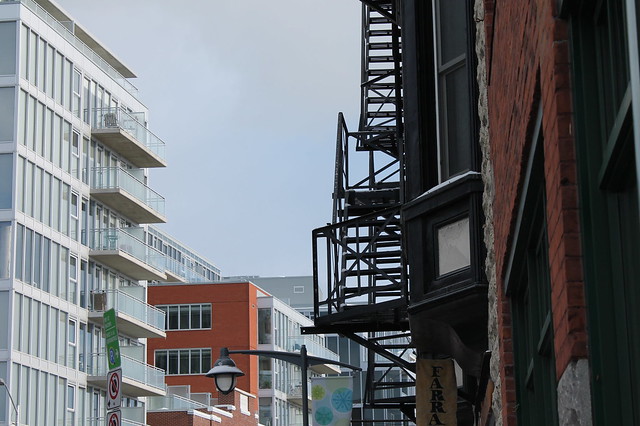 Condo developers have a social responsibility, as do all civic participants, in negotiating interests with the broader community. This is not to say we should expect them to be wholly benevolent and altruistic. As private companies, they have vested interests which may or may not coincide with those of the City, the neighbourhood, and local residents. It therefore typically falls to the City to develop a plan to evaluate and predict the needs of multiple interest groups and individuals, and to develop strategies to keep the coinciding and diverging needs in balance.

The impact of development is not an absolute science. Cities are complex and in constant flux, and things don’t always go according to plan. It is important to continue to observe the actual impact of development and to tweak and adjust as needed. Sudden and large-scale development can significantly alter a community’s dynamic and balance. Spreading development out, both geographically and over time, promotes subtle adjustments rather than drastic changes. It gives communities time to adapt and integrate change. We often hear how successful neighbourhoods “grow organically.” It implies a certain resilience, adaptability, and will to thrive. We should be open to giving new development time to settle in and find its rhythm and place in the neighbourhood.

By densifying core neighbourhoods, condos can make a significant positive impact on increasing the efficiency and affordability of public services. Yet public infrastructure and private development always seem to be in a bit of a standoff. Large condo projects create a sudden increase in demand on local infrastructure, which often scrambles to catch up. Cities are reluctant to invest in developing and improving infrastructure until there is sufficient usership, and people are reluctant to move to neighbourhoods until there are sufficient services. Once again, careful planning and timing are key to ensure these developments positively impact the community. Developers and cities need to work together to turn the confrontational standoff into a collaborative dance.

Economic and cultural background, family types, building types, building scales, business types, etc. all contribute to the character of any neighbourhood. Identity, however, should not be confused with everything being the same. Diversity helps make communities well-rounded, sustainable, safe, active, interesting, and the list goes on. Just because something is different doesn’t mean it won’t fit in. To the contrary, it often has the potential to add new depth and dimension. It’s hard to know what the exact recipe is that makes a neighbourhood work or not. Attempts by new developments to just recreate and add more of the same, so as to not stir the pot, often fall short and overly homogenize. Projects that try too hard to introduce something new often stick out like a sore thumb and create discord. It’s not easy, but it is possible to find a balance where something different and new complements more than it conflicts.

Figuring out what exactly it means to be “in scale” is always challenging because there are always multiple scales in play. Condo projects should be considerate of the existing scale of its immediate neighbours and overall neighbourhood. This does not necessarily mean matching the existing scale. Development is also about looking forward and must therefore consider future scales. As urban populations rise and cities attempt to densify and contain sprawl, development inches upward. A well-designed street level, mindful of human scale and context, can often dissolve the towering or even mid-rise heights of the condos above and integrates comfortably into the urban fabric of almost any neighbourhood.